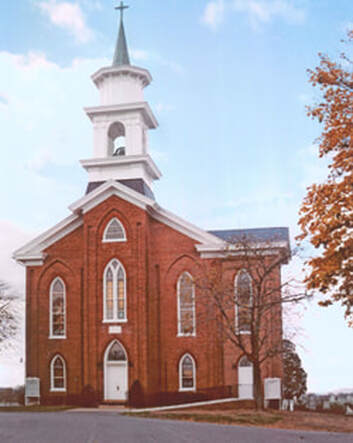 St. John Evangelical Lutheran Church was officially organized in 1780 under the leadership of the Rev. Johann Michael Enderlein, a missionary pastor who had come to this land from Germany in response to an appeal from the Rev. Henry Melchior Muhlenberg, the famous “Father of American Lutheranism”.  The name “St. John” was taken by the congregation in tribute to founding pastor (Johann/John) Enderlein.

St. John became a congregation of the Ministerium of Pennsylvania, the first organized body of Lutheran Christian congregations in the United States, begun by Pastor Muhlenberg.  After initially meeting for worship in the homes of members, the congregation began gathering in a schoolhouse which was erected in 1791, on the site of what is now the home of the congregational sextons, just across the street from the present church building.   This gave rise to one of the congregation’s first nicknames – “The Schoolhouse Church”.

In the early 1950’s, in a geographic realignment of judicatory boundaries, St. John was transferred from the Ministerium of Pennsylvania to the Central Pennsylvania Synod, where it would remain until the break-up of that synod into three separate new synods with the formation of the Evangelical Lutheran Church in America in 1988.

Following storm damage to the church’s tall steeple in 1957, a 15-foot steeple was erected to replace the 40-foot original.  The final change to the then-130-year-old brick building would come in 2005-2006 when, after several years of study, a building project was undertaken to add an elevator, capable of reaching both the main worship floor and the balcony, to the north side of the building.  The design of this addition by Architect Gary Grimm resulted in other useful space being created, including room for a handicapped-accessible restroom and an archival storage and work area.

St. John Church, now also well-known by its present nickname – The Hill Church – continues to do its best to serve as a beacon of the Gospel of Jesus on the same hill its buildings have occupied for over two centuries.  We prize the ministry we share as one of 11 Lutheran Christian congregations which together form the Upper Dauphin Conference, which is, in turn, one of 14 such local groupings of congregations which together form the Lower Susquehanna Synod, which is, in turn, one of 65 such regional groupings of congregations which together form the Evangelical Lutheran Church in America – the largest body of Lutheran Christians in North America.  Made up of almost 400 baptized members, the congregational family of St. John prizes its rich history, even as its members serve the real needs of the community, near and far, and strive to be faithful stewards who will in turn hand off this congregational ministry to those generations yet to come!